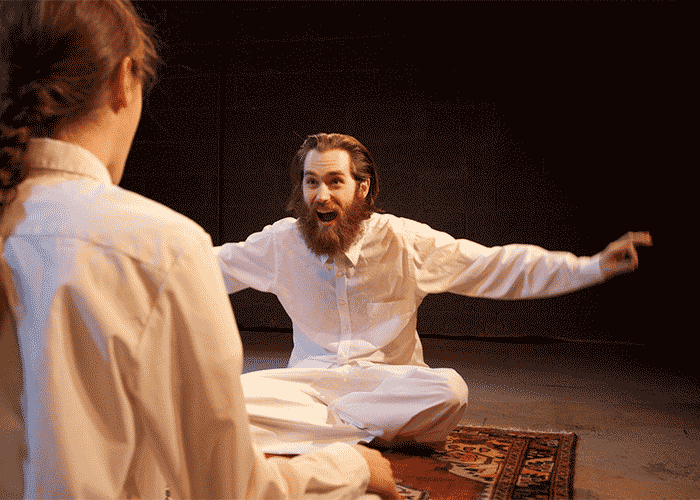 In residency at Wild Project, the festival was anchored by the world premiere of Randy Gibson’s meditative evening-length work, Apparitions of The Four Pillars with special guests Tom Chiu (of FLUX quartet) and William Lang (of loadbang). The festival featured a night featuring works by John Cage performed by loadbang, the MIVOS quartet and others; an evening length performance of Karlheinz Stockhausen’s Am Himmel wandre Ich by Megan Schubert and Jeff Gavett, and a night of solo performances from Nicole Camacho, Annie Lyle, Mariel Roberts, Megan Schubert, Jude Traxler and Kobe Van Cauwenberghe.

One4 for Solo Drummer performed by percussionist and experimental composer Jude Traxler to open the concert.

The beautiful String Quartet in Four Parts, performed by MIVOS quartet, shows Cage’s stunning sense of melody and structure that were so vital to his early work.

In a slight break with tradition, Randy Gibson developed a version of One9 for specially tuned Toy Organ that mimics the sound of the original Shō – he was joined by Jude Traxler on conch shells to perform Two3

Closing the concert was a monumental performance of Song Books with solos from the Concert for Piano and Orchestra performed by members of loadbang with Megan Schubert and presented with videos of Solo for Voice 19 by Randy Gibson and Ana Baer-Carrillo originally created for Avant Media’s celebrations of Cage’s 95th Birthday: John Cage at 95 as well as i-Ching based video lighting created by Oscar Henriquez.