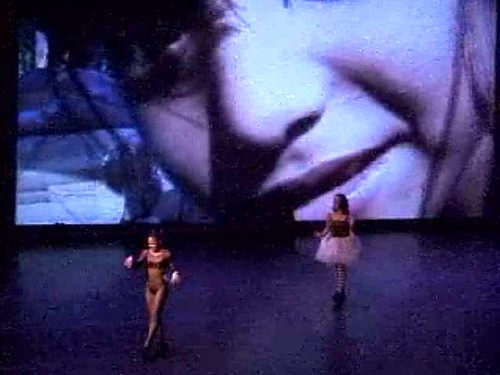 Alicia is a multimedia extravaganza telling the story of Alice in Wonderland through the lens of Mexican immigration and social acceptance. The piece combines dance, three video projections, live music on strings and piano, and 18 speaker CD accompaniment to transport the audience to a stylized cityscape populated by rabbits and wrestlers. Alicia in all her forms wanders through this world confused and alone. The piece consists of 7 short scenes woven together by the Video and CD accompaniments surrounding the audience and performers with mangled images and sound.

Alicia played to sold-out crowds three nights in a row at the Charlotte Irey Theatre in Boulder, CO in 2002 and won second place in the Creative Works Awards, the first time the honor was given to a dance piece. Alicia was the inspiration to begin work on Avant Media; the collaboration between Ana Baer-Carrillo and Randy Gibson was so successful that they wanted to continue working in the same way.