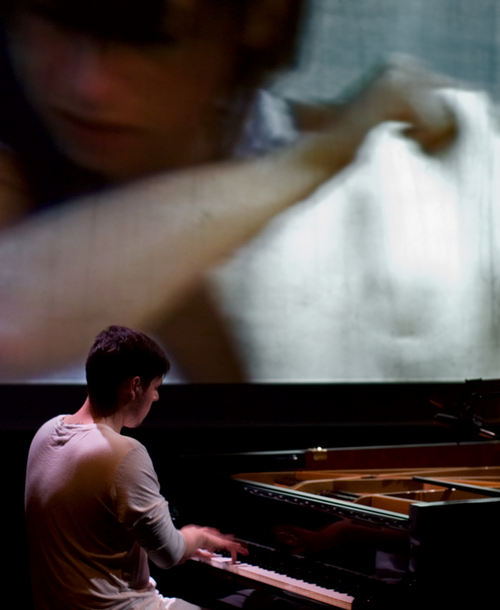 A seamless blend of music, dance, and images, Aqua Madora is a small, intimate work that explores the nature and definition of mourning. The haunting chords and melodies of the re-tuned piano play off these themes, reacting to, and changing because of, the movements on stage.

The music, a highly structured improvisation, performed live, follows closely the dramatic arc of the piece. The piano is tuned to a unique just intonation tuning which allows for smaller intervals than are normally possible on a piano. These intervals are meant to evoke water and the ocean. Their particular vibrations are special, and truly must be experienced live.

Aqua Madora received its world premiere as part of the Sans Souci Film Festival at the Boulder Museum of Contemporary Art June 5 and 6, 2006. It has been shown in San Francisco in 2006 and Giessen, Germany in 2007. As a part of the continuing avant-premieres, Aqua Madora was performed in Morelia, Mexico in October, 2006; as part of Permanent Wilting in Los Angeles in August, 2007; and in a 50 minute version for piano and video as part of Triplicate in New York City in May 2008. The version from Triplicate, Aqua Madora V-ii-2008 21:07:26" - 21:54:40" (NYC) was released February 22, 2011 as a digital download and limited edition CD.