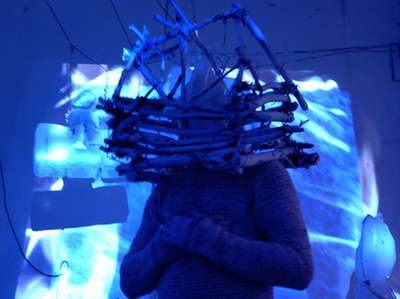 City_M-Y is a modular template for performance and installation settings envisioned by Randy Gibson and Ana Baer-Carrillo.

Made up of small building blocks of sound and image with a live element, the piece strives to be infinitely adaptable and finitely unrepeatable. Each instance of the piece is given a unique title preceded by the city of installation and followed by the month and year. The modules are elemental and simplistic. Their combination creates a unique environment in every setting.

City_M-Y was premiered as Santa Monica Iceman VIII-MMVII with Joe Talkington in a butoh sculpture and utilizing amplified melting ice as a projection surface at Highways Performance Space in Santa Monica, CA August 17-18, 2009 as part of the performance evening Permanent Wilting.