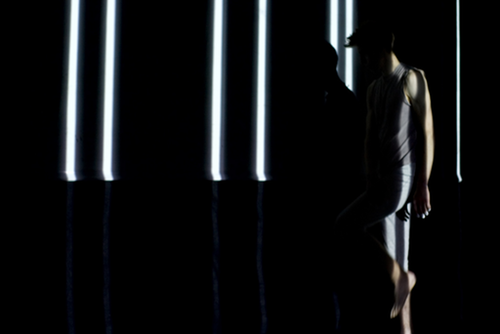 Shiver, by Randy Gibson (sound), Oscar Henriquez (video), and Laine Rettmer (choreography), is a short work for video and dancers that takes advantage of the pure essence of video (projected light) and sound (waves) to elucidate the stark dance. Lines of light projected across the body become distorted and the shimmering prime intervals of the score are colored by the movements. The unusual score, written by Randy Gibson, was created as a concept to explore high-prime harmonic relationships, inspired by those pioneered by his mentor La Monte Young, in a short setting. Shiver is an unusual cyclical collaboration: the sound drives the video, the video drives the dance, and the movement of the dancers changes the sound and the video.

Shiver received its world premiere as part of Triplicate at The Gene Frankel Theatre on May 2 and 3, 2008 in New York City.