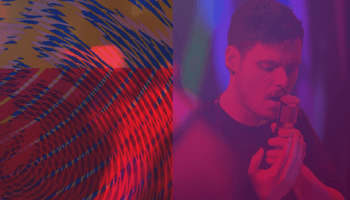 Tickets for this concert will be available at the door

The 2016 Avant Music Festival closes with the world premiere of Gibson's immersive drone-epic Apparitions of The Four Pillars in The Midwinter Starfield Symmetry under The 72:81:88 Confluence in a setting of Quadrilateral Starfield Symmety A:L Base 11:273 in The 181 Profusion. Lasting between three and four hours, it is played by a sextet with voices and instruments, underpinned throughout by a harmonically complex drone rooted in a 72 hz (low "D") fundamental tone.

The new composition represents the latest iteration of Apparitions of The Four Pillars, Gibson's ongoing tuning-based work exploring a set of central harmonies in Just Intonation. Says Gibson, "This new composition is the purest statement of my concerns as a composer. By greatly restricting the available pitches and registers, we are able to work together as an ensemble to create powerful composite waveforms that highlight new sections of the tuning in ways that have never been heard before. The shifting tonality... aided by the symmetrical nature of the sine wave composition, changes our perception of the chord and its elements over time."

It is accompanied by a new video work by Gibson, Quadrilateral Starfield Symmetry A:L Base 11:273, consisting of luminous, slowly evolving geometrical forms that transform symmetrically along four axes. Notes Gibson, "[It] uses psychically charged source material and an austere but richly textured color palette to provide a visual analogue to the music." Gibson has drawn inspiration from the pioneering works of his longtime teacher, composer La Monte Young and visual artist Marian Zazeela.

Please note, because of the duration of this work, the concert will begin at 7PM. Due to sonic interference, heating cannot be used during the performance, so please dress warmly, blankets will be provided and incense will be burned.

The Quadrilateral Starfield Symmetry A:L Base 11:273 video will be installed in the Wild Project space on Friday, March 4 (5 - 9 pm), and Saturday, March 5 (noon - 4 pm), accompanied by GibsonÃ¢â‚¬â„¢s drone work The 27:28 Triple Octave Displacement. Admission is free.