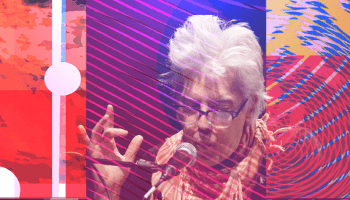 Three 20-minute “micro-operas” by John King will be sung by his longtime collaborators Joan La Barbara and Gelsey Bell, with the composer on viola and electronics. The program features the world premiere of What Is The Word, based on Samuel Beckett’s last work and commissioned by Avant Media with a grant from the New York State Council on the Arts. It also includes Ping (2014), also on a Beckett text, and A-R-S (2015), setting a Latin quote frequently cited by John Cage, an important influence: “ars imitatur naturam in sua operatione” (“art imitates nature in her manner of operation”).

Says King, “These small chamber operas employ chance, improvisation, live electronics and randomly controlled lighting in an intimate setting. The staging is very minimal, with the focus being the experiencing of the sonically rich texts. These mark a new direction in my work, the combining of many different theatrical musical elements within one span of time.” The hourlong performance of the three operas is preceded by a six-hour sound and light installation (noon - 6 pm,), based on the electronic component of A-R-S; admission is free. Lighting for both the installation and the performance will be controlled by a chance-determined program devised by King and Kryssy Wright.