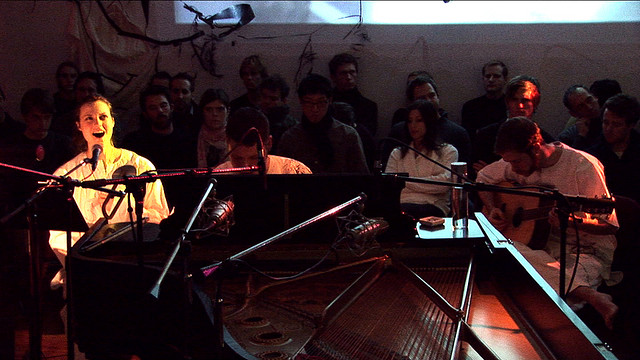 The 2007 world premiere of Anger, what would become Doleo Æternus

In early 2007 Avant Media premiered Anger in SoHo, NYC. Anger was a collaborative effort to depict the contradictory human condition through music, video and dance. The music, composed by Randy Gibson, runs a fine line between control and chaos. It is performed live as a long form hyper-structured improvisation that moves through tonal areas that run the gamut from simple open chords to extremely dense sonic environments, and everything in between. The music is restructured live by a computer that samples the sounds the performers create and feeds them back to them in new combinations, all with complete randomness on multiple speakers.

Accompanying this soundscape was a visual landscape of film and filmed dance created by Ana Baer-Carrillo, text by Oscar Henriquez, and sculpture by Alicia Wargo. The visual elements are extensions of the ideas presented in the music. The chaos and randomness are depicted in the film through various experimental editing techniques. The majority of surfaces in the space are covered in large form video lending a surreal saturated environment to the performance installation.

Anger received its world premiere on January 25, 2007 at 20 Greene in SoHo, NYC performed by Randy Gibson, Mike Rugnetta and Laine Rettmer. Since its premiere, I have been revising, improving and perfecting this piece, and have renamed the piece Doleo Æternus. This new version incorporates elements of North Indian raga as taught to me by La Monte Young and Marian Zazeela and represents the beginning of a performance tradition centered around this piece, and focused on the purity of statement in combining material and process. By mixing live music with a semi-autonomous computer, the simple chords of the piece become a shimmering rhythmic drone that is at once harmonic and melodic.

At its most basic, Doleo Æternus is a cycle of six chords. These chords are held for a long time, and drones are built from them with the aid of a computer. When it comes to the actual performance, the work is structured in two parts: the first a sort of extended Alap section that introduces various perfect fifth and major second intervals, and eventually the minor second, a defining interval in the piece; the second a melodic through-line over which the soloists perform structured and utilized in a similar way to a Gat in rāga performance. These two sections are linked by either an extended piano solo, or an accelerating unison from all of the performers that serves to elucidate the specifics of the computer process.

The rules that define the soloists performance are defined in the same way that one defines a rāga. There is a characteristic scale, based on the Bhairavi Thāt of North Indian Music, although the just intonation tuning we are beginning to use, based almost exclusively on pure fifths, takes it to an earlier and yet newer place. There are characteristic motivic patterns and rising and ascending movements. The majority of the piece utilizes only subsets of the full scale, but the motives, melodies, and patterns of the full scale are always hinted at.