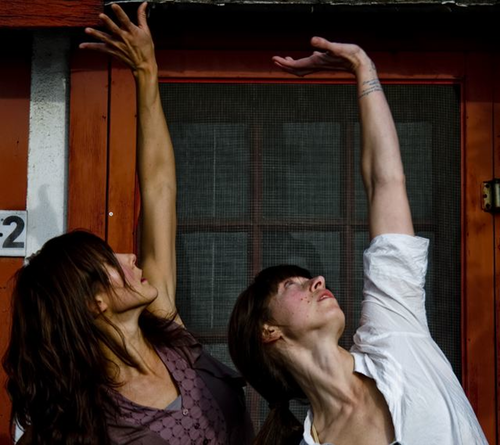 Mémoire-en-Ciel is a work in seven movements for dancers with live piano. Created by choreographer Dani Beauchamp, and composer Randy Gibson, this intimate multi-movement work reflects a strong desire to thoroughly integrate concept of sound and motion.

Each movement is based on a single color of the spectrum and its physical and emotional manifestations. The lighting, designed by Heather Libonati, is based on these colors enveloping the performers, and in some cases the audience, in subtle hues related to that movement’s core color. The choreography, crafted in solo, duet, and trio form, dives into the symbolic references and emotional subtext of each color of the rainbow. The movement highlights the subtleties and intensity of each color through motifs which ricochet between pedestrian, quirky, virtuosic, and visceral. From red to violet the choreography bleeds color as the dancers react to, become, create, and disappear into them.

The music for each section, a series of vignettes performed live at the piano, is based on a single process or concept such as traditional blues chord progressions, minimalist permutation techniques, or the harmonic series. The music and the movement reflect each other and are concerned with psychological references of color, communal memories, and simple beautiful gestures. Mémoire-en-Ciel is performed as one continuous piece, however each movement can also stand on its own. Mémoire-en-Ciel received its world premiere March 26-27 2010 at Highways Performance Space in Los Angeles.