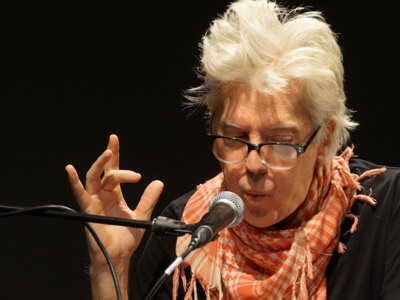 John King is a composer, guitarist and violist who has worked collaboratively with many ensembles, string quartets, choreographers and directors. He has written six operas: ping, with text by Samuel Beckett, impropera, using randomly selected text msg’s from the singers’ cell phones, herzstück/heartpiece, text by Heiner Müller, la belle captive texts by Alain Robbe-Grillet, and Dice Thrown, based on the Stéphane Mallarmé poem, as well as his most recent SapphOpera, using fragments of Sappho’s poetry. He was Co-Director of the Music Committee for the Merce Cunningham Dance Company from 2003 until the end of 2011. He is also the recipient of the 2009 Alpert Award in the Arts for Music and the 2014 Foundation for Contemporary Arts Award for Sound/Music.

Avant Media has commissioned a new opera from King, What Is The Word with funding from the New York State Council For The Arts to receive its world premiere at the 2016 Avant Music Festival.