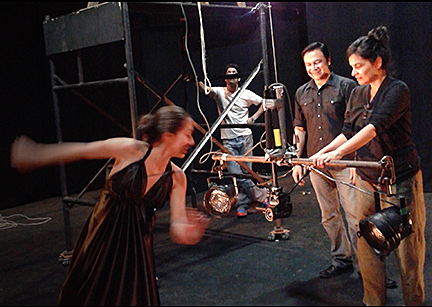 Ana Baer-Carrillo has been nationally and internationally active as a choreographer, dancer, and video-artist since 1992.

In March of 2004 Dance Magazine, in the article “Rocky Mountains Dancing,” described her as “one of the most innovative multimedia choreographers living in Boulder.” In 2003 she co-founded Avant Media Performance with Randy Gibson. In 2005 she co-founded The Sans Souci International Festival of Projected Dance with Michelle Ellsworth. Currently, she is working and performing with Los Angeles based Corpus Delicti and is a co-director of the Boulder based Sans Souci Festival.

She holds a Licentiate of Choreography from the Centro Nacional de las Artes, in Mexico City. In 2000 she moved from Mexico to the United States and attended the University of Colorado at Boulder, from which she received her MFA in Dance with an emphasis in Video Dance. While in graduate school, she conceived and directed projects in several venues outside the University, the highlight being a solo exhibition with performances at the Boulder Museum of Contemporary Art.

The collaborative aspects of Baer-Carrillo’s work have led to projects and performances with choreographers Nancy Spanier, Kim Olson, Gabe Masson, and Tarek Assam; filmmakers Elliot Caplan, Victor Jendras, and Hamel Bloom; and musicians Randy Gibson and Marcelo Gaete, among others. During her most recent artistic engagements she has presented work in Germany, France, Mexico and various venues on the west coast, such as The Theater of Note in Los Angeles and the Yugen Theater in San Francisco.