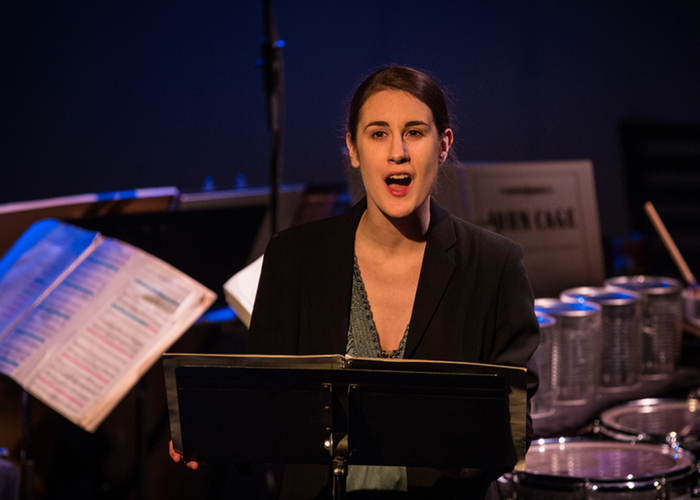 Megan Schubert, soprano, has performed music by Stockhausen for an audience under umbrellas in a torrential downpour for Make Music New York; world premieres at Carnegie Hall; with robots while locked inside a Van de Graaff Generator at Boston’s Museum of Science; on a bike flying by the audience in an installation piece at McCarren Park Pool, Brooklyn; in a giant potato sack while video was projected onto her frontside at Webster Hall; for inmates at a maximum security prison in Ossining, NY; with puppets at E 4th Street Fab! Fest; for Elliot Carter at a celebration of his 100th birthday; shared the stage on multiple occasions with such luminaries as Meredith Monk, Bang On a Can, and with many ensembles championing art music and experimental jazz of today.

In recent years, Schubert sang in the premieres of large works by Sasha Zamler-Carhart, Robert Ashley, Luigi Nono (with Ekmeles), Georges Aperghis, Bernard Rands, James Ilgenfritz, Sonia Megias, Jenny O. Johnson, Nick Hallett, and Kitty Brazelton; a set of premieres at Symphony Space produced by Inhyun Kim's Ear to Mind; and in new productions of operas by Denman Maroney and Jason Cady. In the past season, she performed music with/by Nate Wooley for Anna Sperber's The Superseded Third; as soloist/musical accompaniment of Wally Cardona and Jennifer Lacy's The Set Up with master of classical Cambodian dance, Proeung Chhieng; stepped in to perform an evil videogame character in Jonathan Mann’s Mario Opera; in Cally Spooner's And You Were Wonderful, On Stage; a solo set including her own music and works of Babbitt, Coltrane, Berio, Matt Fagen and Allen Shawn at the brand new Resonant Bodies Festival; a new work by Kristen Volness with Hotel Elefant at Roulette; and workshops of new operas composed by Guy Barash and Christian Frederickson at La Mama E.T.C. Schubert played small roles and sung for the soundtrack of the new Matthew Barney/Jonathan Bepler film, River of Fundament.

This season, she performed works by James Ilgenfritz (WSB@100) and Guy Barash at Roulette and Incubator Arts; an evening length work by John Jasperse and Jonathan Bepler, Within between; and in The Setup: I Nyoman Catra created by Wally Cardona, Jennifer Lacey, and Jonathan Bepler for River to River Festival; and sang Mendelssohn’s Midsummer Night’s Dream with New York City Ballet. Upcoming: Jazztopad Festival in Poland with Nate Wooley.

Schubert has been delighted to co-curate and participate in the Avant Music Festival with Randy Gibson since its inception and revels in the wide variety of musical ideas explored in an environment that encourages taking creative risks. She also assists Moog synthesizer pioneer Gershon Kingsley and opera director Rhoda Levine, and holds degrees from Bennington College and Manhattan School of Music.